With just 10 days to go before we lock ourselves into a building to create dance (yes, this is fun), we would like to introduce the first of our 2013 24-Hour ChoreoFest participants.

Nicole Harris, Monkeyhouse's Community Engagement Coordinator, grew up studying with Karen Krolak who quickly became her mentor.  When Nicole was nineteen years old Karen presented her with the opportunity to perform her well loved piece What’s Next? in Philadelphia in the fall of 2000 and went on to become one of the founding members of Monkeyhouse, a non-profit organization dedicated to connecting communities to choreography under Karen's direction.  With Monkeyhouse Nicole presented her own choreography in New York City for the first time at age nineteen, toured the country numerous times performing both her own work and that of other company choreographers, premiered over a dozen pieces of choreography and worked with an extensive list of students of all ages.  In 2007 Nicole moved to New York City where she studied extensively with Derick K. Grant and Lynn Schwab.  While there Nicole was invited to perform at the TAP CITY Main Event in choreography by Lynn Schwab in 2009 & 2010 at Symphony Space; presented work at the Cool New York Dance Festival in 2009 & 2010 and was asked to perform at the 2008 Edmonton Fringe Festival.  Since moving back to Boston in 2012 Nicole has been dedicating her time to Monkeyhouse and the Natick High School Drama program, where she has been working with an amazing group of students since 2002.  After recovering from a series of strokes in 2011, Nicole has continued searching for new ways her art could help people.  Monkeyhouse's Against the Odds:  Imperfect{vie} Experiments, a festival that looks at artists who look at how to overcome obstacles, is very much inspired by the medical misadventures of Nicole and other members of the company.  She returned to the Monkeyhouse stage in March for the first time since getting out of the hospital and since then has been busy developing new and exciting adventures for Monkeyhouse.  http://www.MonkeyhouseLovesMe.com


LDC: How do you feel in advance of ChoreoFest?  What do you hope to accomplish, personally and choreographically?
NH: I am incredibly excited to participate in ChoreoFest.   Everyone at Monkeyhouse is a huge fan of Luminarium and we're honored to have been chosen to be part of this choreographic adventure two years in a row!  Personally, I am not known for building pieces in a short amount of time, so the overnight time limit is going to be an interesting structure for me.  Luckily, I am being locked in with the amazing Shannon Sullivan.  Shannon and I have known each other for a number of years, although this will be the first time we've created something together.  I am looking forward to seeing what all the crazy parameters of time, topic, lack of sleep and a new collaborator bring out in both of us!  I'm hoping to expand how I think about creating work and perhaps find new processes for myself, no matter what the end result.

LDC: Describe your typical creative process.
NH: Oh dear.  I didn't know people have typical creative processes.  I tend to tackle each project individually.  Look at the parameters of the project and see what happens.  I don't think there's much "typical" about it, for me.  I can't wait to see how other people answer this question!

LDC: What is your current greatest fear about the festival?
NH: I find I'm actually kind of nervous!  I haven't made many tap pieces based solely on a topic. When it comes to modern pieces I tend to be much better about taking a topic and making a piece that says something.  One of my biggest challenges as a tap dancer/choreographer is being able to replicate that process with my shoes on.  So I figured I'd apply to something where I have no choice but to tackle that challenge.  So I'm nervous but excited!

LDC: What's the longest amount of time you've been awake for?  How do you plan to cope with a lack of sleep and an excess of things to do?
NH: I'm not going to lie, I like my sleep.  I'm not sure what the longest amount of time is but as a young person I certainly did more than my share of staying up until all hours doing who knows what.  But those days are long gone!  I don't drink coffee, so I might need to have a secret stash of chocolate ice cream in our studio....
Honestly, besides sleeping a lot during the day before I arrive, I'm not terribly worried about the stress of it all.  We are excited to participate and we want to have fun with the challenge.  If fun involves a brief nap, I'm okay with that.  :)

LDC: Anything else you'd like to share?
NH: I'd like to thank everyone at Luminarium for creating this opportunity.  I love the new voice you have brought to the Boston dance community over the last three years.  I am incredibly excited to have an excuse to work with you guys again as well as a first time to create a piece with Shannon.  And there are a few possibilities of other VERY exciting collaborators who just might show up as part of Monkeyhouse's ChoreoFest adventure too!  I can't wait! 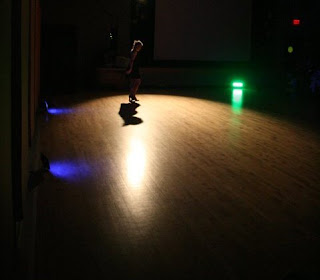 Posted by Luminarium Dance Company at 9:24 AM