Past Week in Review... Kickstarter Campaign and Film Premiere!

Before I jump into an update of all the wonderful things that we have been up to, Merli and I both agree we need to blog more often... even if just to archive the ongoing development of Luminarium!  Awkward apology aside, things have been AMAZING in dance-company-land... read on for more details!

This past week was quite intense- our Kickstarter campaign ended on Friday (4/22) and the week was spent in suspense, both of us wondering if we would make our goal.  For anyone that is wondering what Kickstarter is, the best way I can summarize is that it is a website for creators to find funding for a project.  There are probably thousands of great ideas, projects and products that people thought up from major cities all across the US, and each creates a video about their project.  You set a goal, and if you reach the goal you get to keep the funds donated to you from online donors.  Our project was described here, we set a $2000 goal, with 1$ minimum donations and 18 days to do it.  While we had many fabulous donors who eagerly contributed right off the bat, there was a moment in time (mid-week 2) we sort of lost momentum.  We held our breath for a couple of days, and then all of a sudden we were right back on track!  Our Kickstarter ended Friday at midnight, with $2100 raised, and 42 fabulous backers that donated to our project.

As a reward to our backers and for the enjoyment of our friends and fans, we coordinated the release and premiere of our dance film 'Everything But Blue' with the ending of our Kickstarter campaign.  We went back to the Dance Complex's Thompson Theatre, where we held our very first concert last October, and were pleased to host a good sized crowd of dancers, families, friends and community members.  A large group of lovely Mount Holyoke women came out  to support us and catch the first showing of the film- it was so sweet. 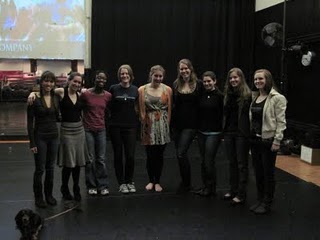 As you can see, Twyla Juniper Lollipop (company muse/mascot/film location scout/morale booster) was in attendance- mainly because she had a cameo in our Kickstarter video, and she was definitely the star of our blooper reel.  We showed the reel, to many laughs, and then unveiled 'Everything But Blue' to the public for the first time!!

To give a bit of background, 'Everything But Blue' was originally just a piece of choreography.  I showed it in 'FRACTURE' in the fall, and really enjoyed the work.  Set to 'Indigo'- a piece of music made famous by Miles Davis (composed by P. Mikkelborg) EBB is a six minute wild whirlwind of dance showcasing several dancers in crazy party dresses.  Merli had the awesome idea to make it into a film, and we collaborated in making the piece suitable for film, and then we shot it and edited it in a few days last November (more info about the film, and the film itself, in a future post).

I am happy to say the film was VERY well received on Friday night.  Since it is short, we ended up playing it several times, and our audience gave great feedback.

Another Friday night high was seeing how many people wanted to purchase our new company tee shirts.  Of course we are in love with them, but sometime after we had placed an order for 60 shirts we began the nervous though-process of "did we really just order 60 shirts?... are people going to buy these?... what are we going to do with the extras??"  Luckily, not only did we have a bunch of backers that earned them by donating large amounts of money, but so many people wanted to buy them!  It is only two nights later and we are out of a couple sizes already... good thing we can order more fairly easily. 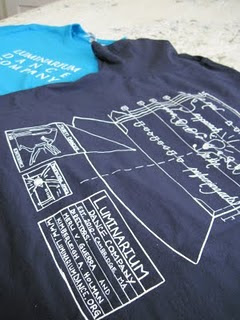 (Left) Back of the navy shirt...a mock light-plot with creative details.  In the far corner is a front view of the brilliant blue shirt.

(Below) The front of our bright blue shirt, with Luminarium's signature dancer silhouettes.  Next to it is the front design of the navy shirt. 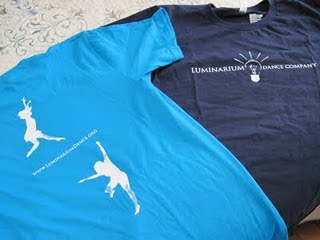 Shirts are available at Luminarium events, or can be purchased through Merli, Kim or a company member.  Each shirt is $20.00, is available in a variety of sizes, and can be shipped for the cost of postage.  Email luminarium.dance@gmail.com for details.


To sum up this massive post, I think it's important to mention that we are feeling very solid as a company.  We have so much going on; new projects and new work underway, new sponsors and funding to make our goals possible, great dancers, and SO much support!  I feel very lucky to have been successful thus far in our venture, and am excited to see where we can go from here.

Stay tuned for info about:

First off, let's start with the most important and exciting news. Luminarium has just launched its first Kickstarter.com Campaign, and is quickly raising funds to provide underprivileged children exposure to the arts as a profession. We are excited to raise the money, as it will allow us to embark on our Performing Arts Project with the kids of the Jordan Boys & Girls Club. Please visit the link below to view our video, and to learn more about the rewards offered with donations:


http://www.kickstarter.com/projects/ldc/performing-arts-project-bringing-art-to-underserve
T-SHIRTS! We now have t-shirts! With two fun and fabulous designs to choose from, how can you go wrong? View our American Apparel jersey-knit tees here for info on sizing and ordering (just $20 each!):

Co-founders Merli and Kim recently spoke on a panel at Mount Holyoke College about succeeding in the arts after graduation. It was a wonderful event, complete with an insightful lecture by Jane Hammond and a viewing of the Five College Dance Dept Faculty Show in the evening. If for no other reason, it was good to spread the word of our company out in Western Mass...


We have recently begun working on our final chapter of our Upon | Within Project: a project that explores our sense of "self," and the internal and external forces that act upon and within us each day. This final piece is a celebration of self, life, and individuality, and so far it has been a very fun piece to create. Rehearsals are often full of laughter, as we experiment with humor, timing, and intricate layering of quick phrases. View the film above for a sample of the piece!
Posted by Luminarium Dance Company at 9:55 PM No comments: