Luminarium at the Historic Wayside Inn

On Sunday, July 24, 2016, Luminarium presented the culminating performance of its annual Cultural Community Outreach Project—dedicated to highlighting an historical community establishment through the integration of dance and the arts.

For its 2016 project, the company chose to showcase Longfellow's Wayside Inn in Sudbury, MA, as it celebrated its 300th anniversary as a local landmark of great historical significance. Viewers were invited to picnic on the lawn while watching one of Luminarium's three performances throughout the afternoon. The company created three new live performance pieces honoring the Wayside: One focused on the land, one on the inn, and a third that condensed the Wayside's 300 years of history into a 3-minute theatrical introduction. Viewers were also eager to visit the grist mill, where Luminarium's latest film—an experimental film featuring slow-motion dancing with flour—was projected onto the mill's large stone wall.

Following the event, Merli V. Guerra (Artistic Director and leader of this annual endeavor) shared with the company:


We received a ton of glowing feedback from strangers of all ages and backgrounds about every aspect of the event. A few highlights included an historian who’s written many books about the Wayside saying that we truly “got it” and "captured the history" and essence of the Wayside. An elderly woman approached me to say that she isn’t able to make it into the city any more and was so appreciative to have professional dance of our caliber brought to her town—and that her sister was so thrilled to hear about the event the night before, that she hopped in the car and drove three hours up from CT to join her! Mark, our incredible Wayside tech helper, told me that the music carried all the way to the chapel, and that many of the visitors there inquired where it was coming from, then promptly raced over to the mill. And of course there were so many young dancers in attendance who had never seen contemporary dance before, but were excited to see more now. In case you didn’t think you were making a difference—you are!


Below is a list of press, footage, and photos documenting this successful event. Many thanks to all who were involved in this project, and for those just viewing it for the first time, enjoy!


The Hostess Diaries, filmed and edited by Guerra.

Another copy of The Hostess Diaries, including opening remarks by Guerra (choreographer) and Mali Sastri (composer), was filmed and given to us by John Doherty.


WMCT-TV in Marlboro: News clip featuring interviews with Guerra and Company Member Amy Mastrangelo, alongside footage from the 1:30pm performance.

Preview in The Town Crier. 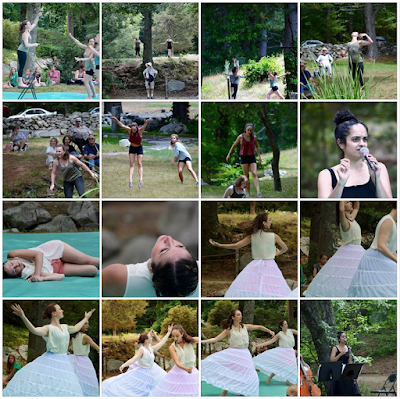 We are grateful to have been sent so many stellar images of this beautiful event. Click on the thumbnails above to view the full gallery including photos by Karen Irwin Photography, Maria Fonseca Photography, and frequent Luminarium photographer Ryan Carollo.