On June 21 and 22, we had the great opportunity to collaborate with Jordan Matter (a NYC based photographer) and his Dancers Among Us project.  The project focuses on finding dancers in moments of movements set within everyday life.  With tons of national and international attention already, the project had used dancers of outstanding caliber from organizations both large and small, and we were ecstatic to be involved.  While nervous about the weather holding out for the limited time Jordan was in town, Louise, Mark and I got in the car and blindly embarked on a photographic adventure!


The following photos are just a few candids I was able to capture on my phone amidst Mark being impaled by a pickax and trying to direct some traffic... 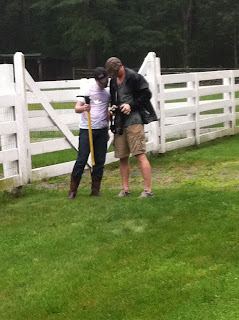 Mark and Jordan review the photos, and figure out what to change. 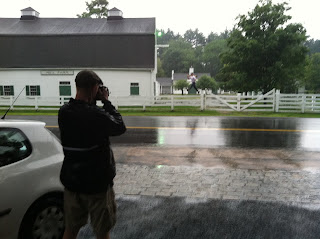 
Mark's Dancers Among Us Experience

Its one thing to schedule a photo shoot in the pouring rain.  It is quite another to greet your formerly unknown photographer while he carries a pickaxe and asks you to drive into backwoods farms where no one is home...in the pouring rain.  It wasn't that I was scared, but I think that unnerved would be a good word for it.  As Kim drove us through winding roads, Jordan Matter's head would bob around, almost like a crow looking for the right shiny object for his nest.  Suddenly he would ask her to stop and then he was out the door, exploring for the right setting for his shots.  Using just such a technique Jordan found an all white farm with deep green fields, gravel driveways, and a white fence.  This was it.  First we tried various t-shirt and ball-cap color combinations and when it was just right, he asked me to soak both the shirt and the hat in a nearby puddle to emphasize the rain.  (Did you remember that it was pouring rain this whole time? Just checking.)  Then we practiced.  Jordan had asked what my strength in dance was and I answered inversions.  And while inversions may be my strength, inversions with a pickaxe are not.  So we moved on to another one of my strengths:  jumps.  Jordan asked me to climb the fence, sling the pickaxe over my shoulder, leap from the fence, and maintain a calm demeanor as if I were strolling off to work in the field.  The first attempt told us this was exactly the shot he was looking for.  Landing the first attempt explained the physics of momentum, levers, pickaxes, and spines.  More plainly, as I landed the first jump, the pickaxe acted as a lever on my shoulder and crashed into my spine.  Luckily the pointed end of the pickaxe as quite dull and only resulted in a bruise.  After taking a few moments to regain my sanity, I remounted the fence leaped once again, this time releasing the pickaxe just before impact so it fell to my side.  This process was repeated nigh on fifteen or so times until we got the perfect shot with the perfect framing.  Jordan turned out to be a very kind, if eccentric, guy who truly has a talented eye, particularly for environment.  Just the guy for a rainy day photo shoot. 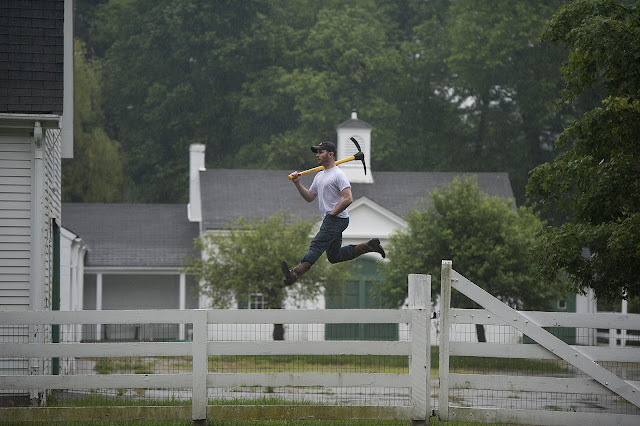 
Louise's Dancers Among Us Experience


After having tagged along for Mark’s photo shoot the day before, where I witnessed the semi-dangerous, repeated act of Mark jumping off the side of fence, in the rain, with a pickax in one hand with the other hand in his pocket, I didn't really know what to expect for my photo shoot with Jordan Matter.  But Mark’s photo had turned out excellently so I was eager for my turn.  We weren't sure if it was even going to happen, seeing as it was yet another rainy day, but ultimately I wanted to take the chance because it was Jordan’s last day in the Boston area.  He seemed like a pretty spontaneous person, giving just a moment’s notice and ready to go for it even if it was a long shot.  So I too decided to take a gamble on the rain.  He had two shots in mind: one in front of a beautiful farm and one...
in this huge, picturesque old tree.  We went to the farm first, and we were lucky that the rain had finally stopped.  As I offered a red apple in the palm of my hand to a field of disinterested cows and calves, I had to pick a pose that I could hold for quite a while since the goal was to catch the eye of just one of the many grazers.  I chose to stand in arabesque and had to do so over and over, moving from one cow to the next, to see who would participate.  As we moved up and down the fence some of them completely ignored me, while others became a little uneasy and walked away.  Twice, Jordan wondered aloud what would happen if I were to jump the fence and get right in there among them all. I nervously pondered this idea with him, trying to sound accommodating while secretly hoping that it wouldn’t actually come to that, as I wasn’t sure what reaction I’d receive from the mothers if I startled their young ones.
I thought that Jordan had time for only one shot, but he all of a sudden decided to go back to this tree that he was initially quite eager to photograph.  The massive tree stood in the yard in front of a grand, white house.  Jordan rang the doorbell to ask the owners permission, which was immediately granted by the husband of the president of Wellesley College.  As I reclined on the long, windy and damp branch, I tried to look relaxed in order to assume a daydreaming appearance. Maintaining balance while also extending my leg into the air was not the easiest task on this bumpy tree limb.  Once we aligned everything we’d discussed, as there was always a verbal dialogue during takes, and he’d captured what he wanted, he helped me down out of the tree and I bundled up in some warmer clothing before hopping back in the car.  Once we were all done, we realized how lucky we were to have that rain-free pocket of one and a half hours, ending up with two photographs when we’d had previous uncertainty of even attaining one at all.  Jordan also explained to me that these were actually perfect shooting conditions in terms of lighting: not sunny, but a nice white, even light from the sky covered in clouds.  Also the colors, predominantly the green scenery, were vibrant and made my white dress stand out because of just being touched by the rain.  I left feeling wiped out from this tiring yet exciting photo shoot, but feeling at the same time thoroughly content and privileged that I was able to have the opportunity to work with the great visionary photographer, Jordan Matter. 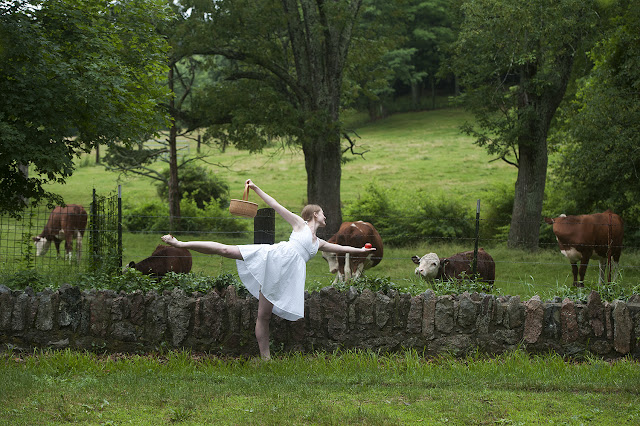 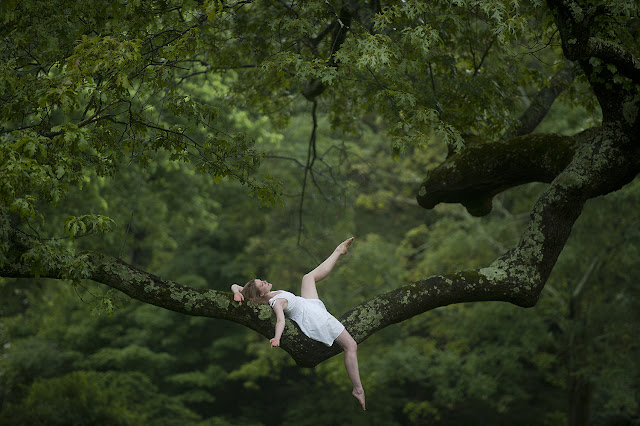