I have some weird and amusing dreams.  As a child and preteen I frequently had a repeating dream in which I canoed through water-filled highways to a house where two vampires in full slapstick fashion would each try to convince me the other was the ‘bad guy’.  Someone decode that, please. I currently have precognitive dream experiences on a frequent basis, which will never cease to freak me out.  However strange my dream process is, the thread that ties it all together is that while dreaming I always feel incredibly coherent in my choices and I most always have a task to accomplish. I’m always in control and invested in what I'm doing, but I could never explain why I was doing it or for what purpose in the dream moment. Lucid and yet not lucid, all at once. 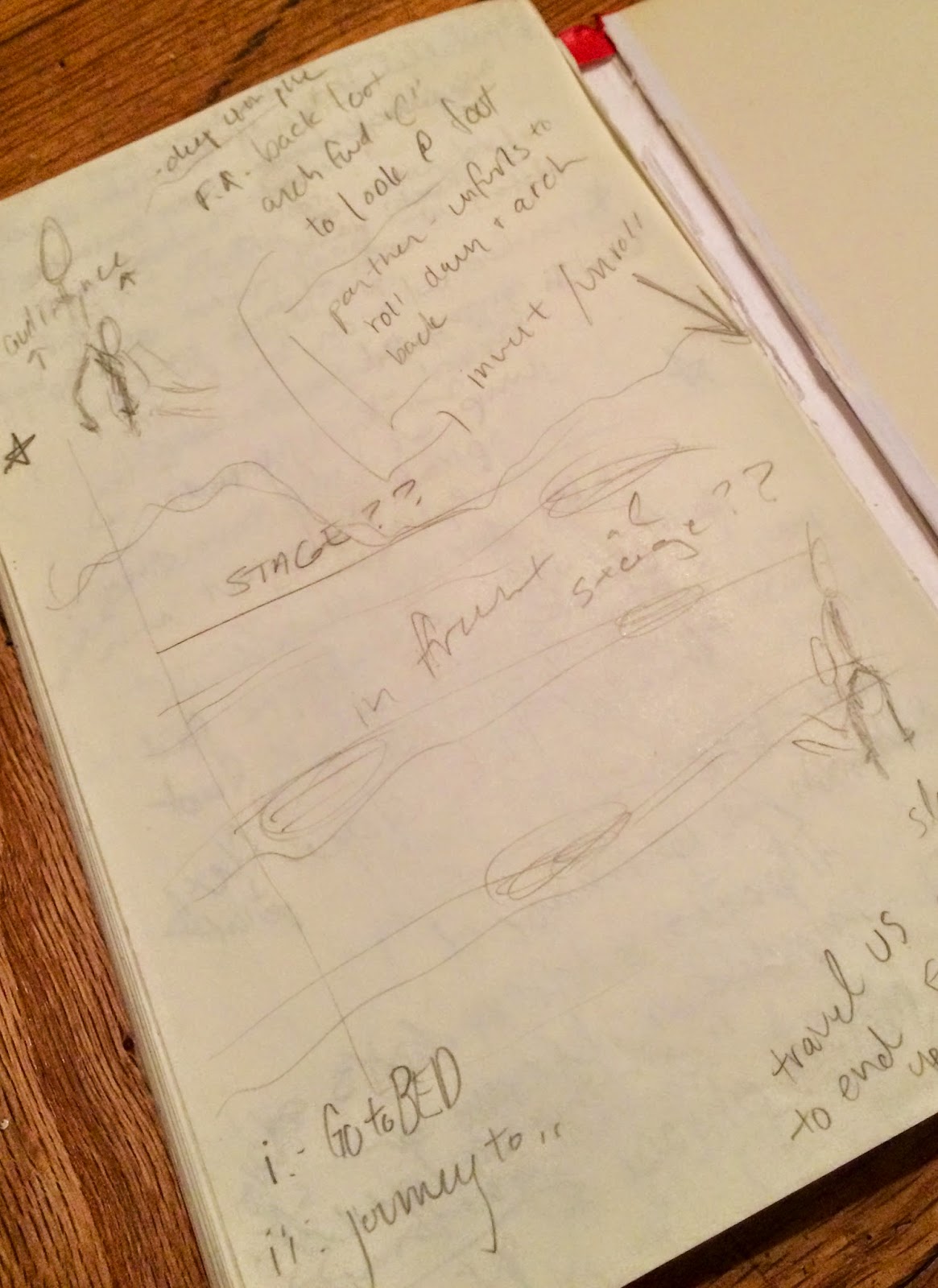 Fast forward to conception stages of The Sleeprunner.  I was fairly convinced I wanted to do a piece that described the feeling detailed above.   More specifically I wanted to explore a sort of journey dream where one is traveling through an unknown landscape while trying to accomplish a vital goal.

Instantly I had images and a scenario pop into my head; when my husband and I travelled to Maui for the first time we were instructed to drive up a well-known inactive volcano to watch the most incredible sunrise of our lives.  What I didn’t realize was that seemingly easy task was all based on waking up around 2-3am to drive to the other end of the island and up this massive volcano.  If you know me, you know my difficulty with early mornings, but my incredibly good-tempered husband woke me up and somehow got me to the car where I drifted groggily in and out of sleep as we drove.  I got tiny glimpses of our dark surroundings, but continuously fell back into my dreams.  Just the feeling of drifting in and out of sleep while setting out to accomplish the mission of catching a sunrise on top of a volcano - all amidst very unique terrain - was incredibly absurb... especially so when topped off with watching a sunrise and a lighting storm from above the clouds, on a mountain top that resembled Mars (or at least photos I’ve seen of Mars).

When we got to work on An Obscure Journey (Sleeprunner Scene 4) in the studio, I attempted to create the piece under the same conditions as my vague traveling dreams and my bizarre Maui experience.  I restricted information on the journey itself from the dancers, while encouraging them to desperately want to go along on the trip.  On a whim I ripped up a tee-shirt before one rehearsal to use as blindfolds, restricting their sight, and loved the moments of risky wobbly dancing on an otherwise resolute journey.  Later in the process I added a master manipulator figure who would be located far above the dancers as they traversed the space, to give the journey an even more obscured but important task.

Phew!  I’m very curious to observe the audience as this piece unravels, and to hear their thoughts.  While vague and mysterious, far different from the ridiculous and wild moon piece I’ve most recently been working on (that one would require its own blog post!), I hope viewers pick up a certain sense of suspension as the dancers perform their quest across the space and equal euphoria as tasks are accomplished.  Let your need for clarity go, just for a moment, and join us on An Obscure Journey.

See you at the show!! 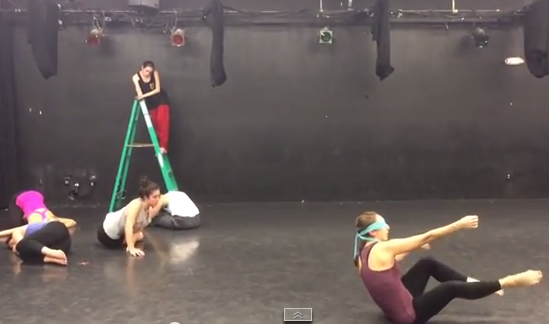 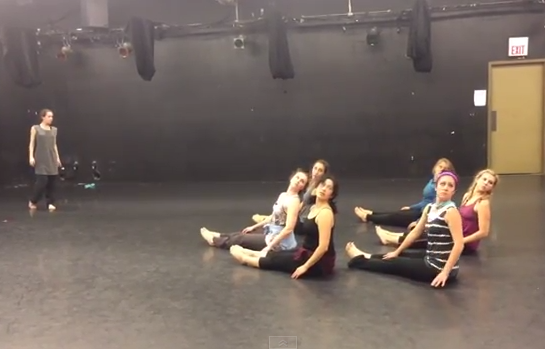 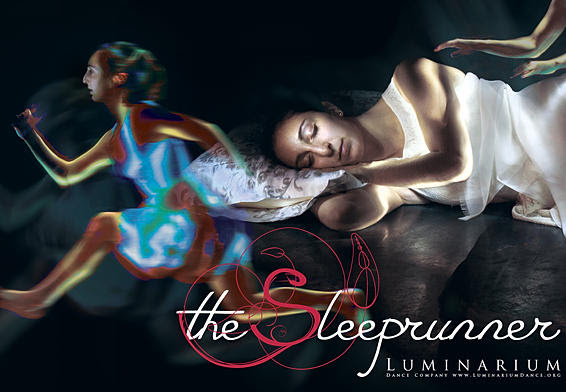 Posted by Luminarium Dance Company at 3:35 PM No comments:

For those of you who attended Luminarium's 4th Anniversary Gala & Showcase back in June, you may remember seeing your first sneak peek of The Sleeprunner, with a solo set on Katie McGrail, revealed from underneath a sheet as she struggles to sleep.

When I first set this solo I didn't yet anticipate that it would continue beyond the two minutes Katie then performed. It wasn't until my third week into being Green Street Studios' pilot Choreographer in Residence (in tandem with Kim) that I was able to delve further into the realm of sleep vs. sleeplessness. With mentors Jean D'Urbano and Wendy Lawson present for my weekly showing, I performed a new solo, and the three of us discussed at length the bigger picture questions of where we go when we sleep, who we are in that moment, and how this solo could be extrapolated into a larger group. Thus began my new quartet Insomni.


For anyone who knows me, Sleep and I have never had a stable relationship. As a child I had night terrors, as a teen my parents frequently found me sleepwalking in circles around the kitchen table, in college I was teased relentlessly for my full-out comatose conversations in the middle of the night, and now as an adult I am consistently battling my way to sleep after hours of tossing and turning--trying to "shut off" my creative brain. In fact, it wasn't until about nine months ago that I once got a night of sleep so solid that I woke up in the morning to find the air in front of me eerily crystal clear and my brain fully charged--an incredible feeling that I will probably be chasing for the next quarter century!

How does this relate...well, as a choreographer I find that I am often driven to create new work symbolically. My forte is not in the movements themselves, but rather in the thoughts behind them, driving them. For this new work, I came into the studio with only a vague sense of who these three other dancers were as they crawled onstage from the shadows to join Katie in her fretful slumber. Yet as my work with Amy, Rose, and Gabby unfolded, I began to find myself somewhat confused by these strange little "sleep gremlins" as I affectionately called them, and found myself struggling to understand why I was compelled to create these characters, and why Katie at moments was allowed to coax them into slumber themselves. It was not until a fresh set of eyes peering over my shoulder led to a description that has since helped me finish the work: "You know," he said, "this reminds me of the hierarchy of thoughts that keeps my brain from quieting down when I'm trying to go to sleep." Ah ha--hierarchy! (Thank you, Sean Connolly.) With this new way in which to view my own work, I now knew how to approach my dancers, promptly telling Katie to think of Gabby as "that simple chore you can easily check off the list first...like washing that dish in the sink." I then pegged Rose as the next tier ("doing your laundry") and handed Amy the title of Head Sleep Gremlin ("doing your taxes"). With this new hierarchy of gremlinage in place, the five of us confidently and swiftly banged out the final seven minutes of the piece.


So while I won't leave you with the ending (sorry, you'll have to come see the show to see how the Gremlin vs. Katie battle plays out), I'll give you one final fun behind-the-scenes trick to viewing Insomni when it debuts December 5th. I gave myself a new choreographic challenge (or rubric, really) while working on this quartet. In order to further enhance the feeling of being stranded between sleep and sleeplessness, whenever the hands are guiding the dancers' movements, the right hand is always the instigator while the left hand is calming the dancer back to sleep. It may sound like a nitpicky detail, but it creates for the performer a sense of duality within the body as one side consistently awakens as the other attempts to relax... And now it will be our little secret (for those of you who read this entry) to keep your eye out for this as you watch the scene unfold!

Posted by Luminarium Dance Company at 9:17 PM No comments:

Luminarium's long-awaited 2014 feature production is bringing with it several "firsts" for the company. For starters, the show has expanded to a two-week run in an effort to make the work more accessible to Luminarium's growing audience. It is also the first time co-directors Guerra and Holman have presented a production intended to be viewed as a singular joint work. Yet the most stunning "first" of all has to be the costumes...

How do you create a dreamworld? What does a dreamworld look like? In my early conversations with Kim and Merli, I suggested we make an inspiration board as a way to visually explore and get a feel for this world we hoped to create. You can see it here: pinterest.com/moscode/sleeprunner

Using this as my jumping off point, I began to formulate a language for the costumes. They would be:
I landed on this for my color palette: 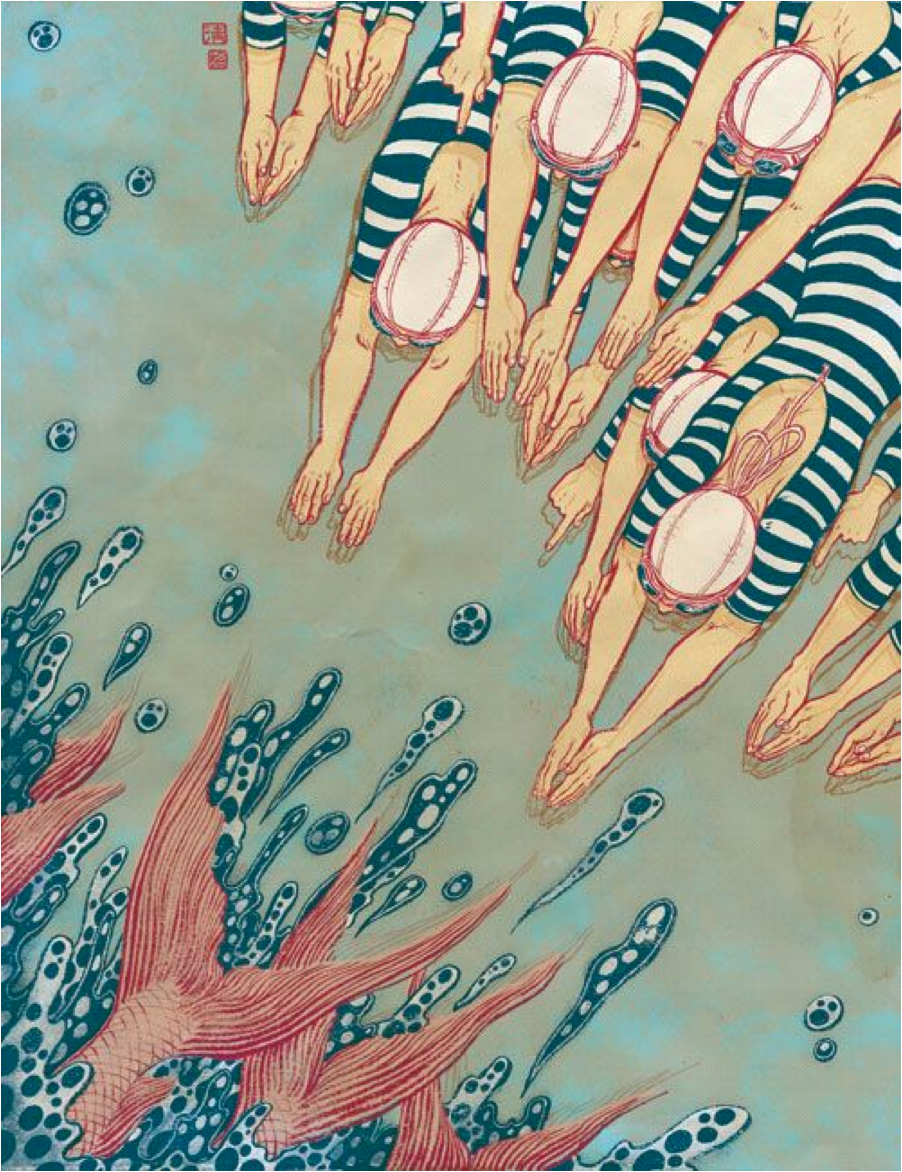 And because The Sleeprunner delicately shifts back and forth between the worlds of waking and dreaming—muddling the line between reality and fantasy, I wanted the costumes to reflect that journey as well. Each costume has a base of various shades and textures of white like clean canvases. Just as we drift off to sleep and our unraveling subconscious starts to fade into our mind’s eyes, soft comforting ephemeral hues seep into the costumes, punctuated with a menacing undercurrent of darkness. 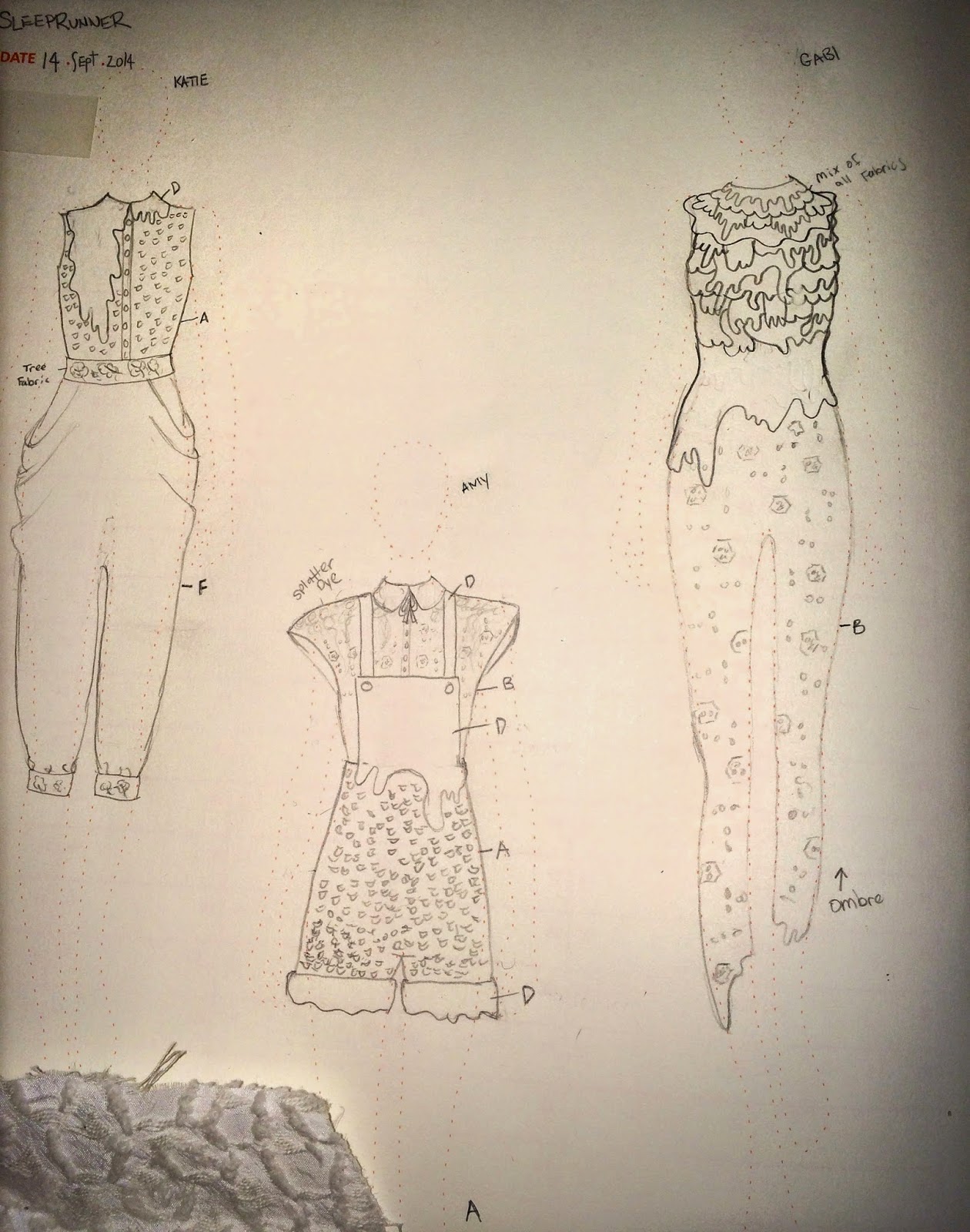 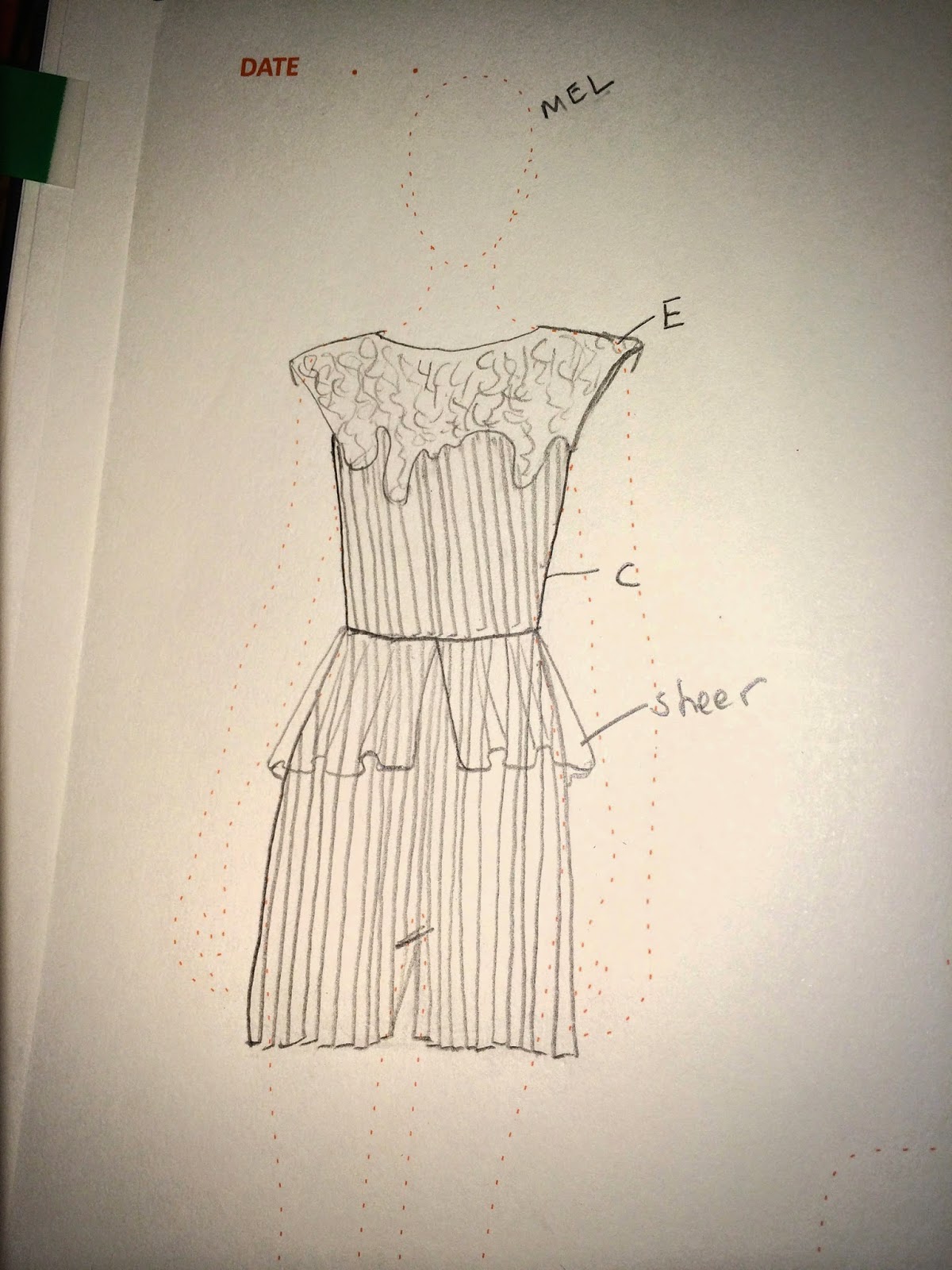 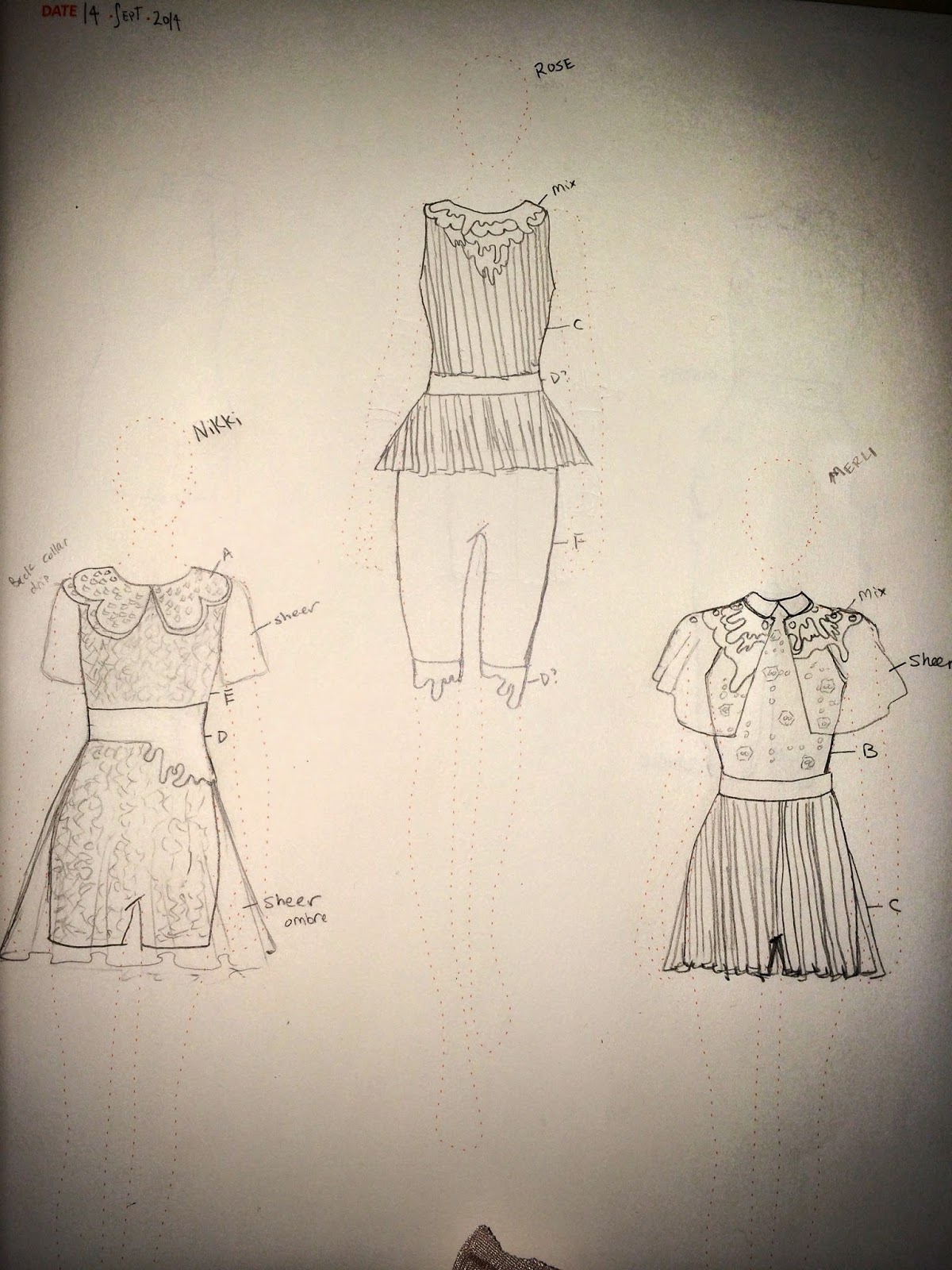 Still sewing away, but I cannot wait for you all to enter the world we have created!

Posted by Luminarium Dance Company at 3:01 PM No comments: