Exploring Icarus and Learning How to Fly


When I was younger (I would say much younger, but it would be a lie) I used to search for walls, tree stumps, large rocks… anything I could test myself on by jumping off of.   I loved everything about my strange habit, the nervousness leading up to leaping off an eight-foot retaining wall at my grandmother’s condo complex, the excitement of doing something any reasonable adult would probably not approve, and that crystal clear moment of free-fall before scrambling to land.  Now that I am an adult, and one without a great deal of free time/living in an urban neighborhood (parkour, anyone?), I’ve been remarkably grounded.  I’ve come to terms with this, there are plenty of other ways to get an adrenaline fix, but I think it is a valid link to my interest in the myth of Icarus, and translating that story into a new work for Mythos:Pathos.

Icarus, to seriously summarize, was the son of Daedalus, a craftsman.  Trapped on the island of Crete by King Minos, Daedalus constructed wings of wax and feathers so the two could fly to freedom.  Despite his father’s warnings to follow him and not fly too close to the sun, Icarus breaks from the plan, inevitably flies too close to the sun, and falls to the sea.  Most retellings and discussions of this tale attribute Icarus’ fall to over-ambition or hubris, but I don’t think I agree, at least not with the connotation behind ‘hubris’, or being overly ambitious!  As a storyteller it is my responsibility to represent the myth accurately, but in relating to this character I am opting to present the story (especially causes of Icarus’ extended flight) from my own perspective.  I am very lucky to approach this work as a choreographer, since the tale is indeed movement-based, but more on my movement research in a bit.

Adrenaline Amnesia.  I’m sure this isn’t an original phrase, so I won’t take credit for it, however, it is catchy and concisely sums up my thoughts on and personal connections to Icarus.  It is something, I would hope, most everyone has experienced at one point or another, and often as the result of unheeded advice.  A physical action or not, one does something contrary to advice or a mandate from an authority-figure, experiences the rush, and is much more apt to continue the action and have the advice vanish from the mind.  The obvious examples; sneaking out of high school to do [non-academic activity of choice about town] against parent/teacher rules, a taboo relationship, or physical examples; driving too fast, swimming too deep in the ocean, jumping off high objects (!), various other semi-risky and addictive activities.   It is possible that flight just feels so wonderful and freeing that Icarus keeps flying and flying, not to prove that he can, but because that authoritarian warning has simply dissolved from his mind in the euphoria of the moment?  My dislike of authority decrees is simply a coincidence here, since while I approve of the disregard, it wouldn’t be a conscious choice in this situation, now would it?

I was fortunate enough to get to experiment with both adrenaline amnesia and the physical feel of flying in an indoor skydiving session at SkyVenture NH.  Mark (Icarus performer/fellow adrenaline connoisseur) and I suited up, complete with kneepads, goggles, earplugs and of course a one-piece flight suit and made our way to the flight chamber.  My personal goals were to see if, in fact, I would fall into the 100 mph winds and experience some sort of thought-erasing euphoria, and also to experience how a body suspended in the air actually feels as movement research.  The results varied.  I was very interested to discover how whole-body the physical flying experience was.  As movers, I can say we approached learning how to fly from a different perspective and understanding than the others in our group.  Every slight shift in working muscle groups had the potential to shoot you high into the air, or bring you plummeting down to the metal grid below.  If it was allowed, I could have easily spent an hour playing with the varying effects of slight body movements in the vertical space, I could probably write an entirely separate blog post on this topic.

Mentally, while there was no magically activated euphoria, there was a huge sense of calm.  As an individual with a mind that’s typically thinking about 5+ different things at once, and also probably 3 irrelevant distracting things in addition to that (attention defi-what?) I found this strange peaceful nothingness that was really quite lovely.  Perhaps it was caused by serious wind rushing past my ears, but also it was the first occurrence in an indefinite amount of time that I was completely separate from the rest of the world.  No verbal communication was possible in the wind tunnel, no iPhones or electronics to use, the wind blocked my ears… I wasn’t even connected to the ground.  For 6 minutes, I was a completely independent-free-floating body suspended in air, and while I didn’t have that stomach-twisting, blood-pumping, heart-racing thrill, I found a sort of break from the world.

Phew!  Does this prove anything I set out to investigate?  Not fully.  However, I’m satisfied with my own Icarus story, as we approach performance, and I am completely content to think about this myth for months to come.  I hope my artistic liberty with Icarus serves to let viewers feel free enough to question the myth, my retelling, and of course to enjoy the piece as a whole.

PS:  Think this post is interesting?  Come see and discuss Mythos:Pathos.  This week's show is at the Armory (Somervile) and will take place Friday (Aug 3) and Saturday (Aug 4) at 8pm.  Tickets can be purchased at www.LuminariumDance.org/buy-tickets, or at the door.
Posted by Luminarium Dance Company at 8:27 AM No comments:

I have always been a bottom. Let me explain, because being a bottom in dance is like being a top in life. When I was a little girl, I was actually a fairly big girl (not like child obesity big, just, you know, AMERICA big). As a big little girl dancer, I was always the one lifting people. I would even lift the boys, who in their adolescent bodies were scrawnily easy to pick up. Even though I am normal sized now, the empowering effect of dance lifting makes me feel safe....like if we got in a fight, I could totally take you down....or at least pick you up. By the time I got to college I was a lifting machine. I could throw a lithe ballerina-type person over my head any way you like: right side up, upside down, sideways, one leg over here, one leg over there, shaped like an octopus, whatever. Sometimes I would help the boys (uh, is this right? yeah, bro, now put some MUSCLE IN IT). I wish I could give everyone two tickets to my gun show, but I've never grown big arm muscles. I just balance people over my spine as best I can, lift with my legs, and try not to freak out.

So it's lucky (or maybe planned) that the piece I'm dancing in, Sirens, involves a lot of lifting. We are making multi-person monsters. Some of these monsters are very sexy indeed - big and sexy. To accomplish the big part we are climbing on top of each other. In the first five minutes of working with Luminarium I learned to lift my partner Hannah with her feet on my hands and throw her over my head, flip her back on her feet and then pop her back up in the air again. In the next five minutes I learned to do this in the dark. There may have been a $0.65 keychain light to guide my way. No big deal, starting off easy. Then we invented some never before seen lifts of epic (poem) proportions. Some are epic fails and others are epic successes.

Andromeda - From the Dancer's Viewpoint

You may have seen the recent photos online advertising Luminarium's upcoming Mythos:Pathos Project, specifically featuring the Andromeda Solo; a piece that incorporates intricate movement with complex (and wearable!) visual art and lighting design. It is a feast for the eyes, and a feat for those currently building it. But while Luminarium choreographer Merli V. Guerra, lighting designer Matthew Breton, and visual artist Julia Wagner continue to create the wearable light-based structure, it is the soloist who will ultimately become the most intimate with the final product.


Luminarium Senior Company Member Melenie Diarbekirian joined LDC a little over a year ago. She is an accomplished performer, currently also dancing with Urbanity, and has worked in a variety of theatre settings. But! As the character of Andromeda in Mythos:Pathos, Melenie now finds herself facing some very new and exhilarating challenges. Below are some of the thoughts that cross her mind, while working with one of the most unique costumes she has ever experienced:


It's really interesting having to dance with a crazy contraption above my head. At first I thought that my movement was going to be very limiting, but I'm able to do a lot more then I thought I would. Because the piece is built around a bra, I'm able to move my torso so much more which is great!

When I dance with the piece on, I have to be very spatially aware of the area above my head.  I think of it as having extra limbs that are growing out of me.  Just like my arms and legs, I have to be careful of my limbs.  But I also have to make sure that I don't break the lightbulbs, so especially when doing movement on the ground I have to be very careful.  I try to extend my energy into the piece above so that it's not weighing me down, but lifting me and extending myself to my fullest.  This also makes me feel as though the piece is part of my body as opposed to something that is on top of me.

I love experimenting with it. There are so many places to weave my arms in and out of the piece and even places to grasp onto it. I'd have to say that turning is one of the most difficult things to do. Because the piece is not symmetrical, the weight is off balance and can sometimes throw me off, but in recent rehearsals I've learned to work with it and acknowledge which side is heavier so I can adjust it on the other side. 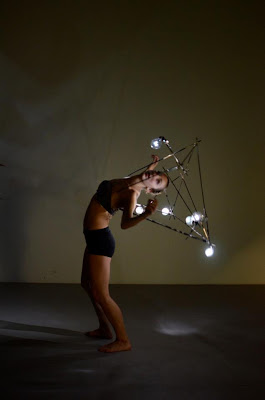 There is certainly plenty of consideration going into all aspects of the Andromeda Solo, as well as the Mythos:Pathos Project as a whole. Stay tuned for more entries chronicling the making of Andromeda, and keep your eyes open for some exciting indoor skydiving posts!


TICKETS to MYTHOS:PATHOS are now online for our performance at the Armory in Somerville (Aug 3 & 4) and the Arsenal Center for the Arts in Watertown (Aug 31, Sept 1 & 2).
CLICK HERE to buy tickets, or to learn more about these performances.
Posted by Luminarium Dance Company at 10:00 AM No comments: